Specific running back drills can improve both the ability to break tackles and ball security.

Sprint Football (formerly called Lightweight Football) has been around since 1934. This collegiate sport abides by the same NCAA rules as all college teams do. The only difference between Sprint football and regular college football is that in Sprint football, players must weight no more than 172 lbs. Sprint football is currently governed by the Collegiate Sprint Football League (CSFL). The CSFL is made up of eight teams: Army, Navy, Cornell, Princeton, Penn, Franklin Pierce, Mansfield and Post University.

At Army, a premium is put on toughness, courage and determination.  Whether on the battlefield, or on the football field, these three traits do not change. As the RBs coach, it is my duty to train all Black Knight backs in a variety of facets that will allow them to become the best RBs that they are capable of becoming. One of the most important qualities that I look for when assessing a potential running back recruit is how tough they are as a runner. Will they take on nasty linebackers in the trenches? Will they throw a shoulder into a nosy defensive back? At West Point, our RBs must never do two things: run out of bounds (unless the game dictates it), or shy away from contact in the trenches. There is no middle ground here. Army RBs must work to become the toughest backs in the nation.

I will outline three extremely important drills that we use in order to build the tough running style that Army running backs are known for. The first drill (Diagram 1) is our Blaster Drill.

Purpose: This drill develops both tough running and tackle-breaking ability for a running back.

Method:  Have two players with arm shields stand relatively close to each other, forming a small barrier for the ball carrier to take on. Have the remaining running backs stand about five yards from the shields in single file. Starting one at a time, have the RB secure the ball in one arm (high and tight) and, at about 50% speed, have them approach the shields. Once the RB gets to within a yard of the pads, he must explode into the barrier as he attempts to penetrate it.

•  Ball security must remain intact throughout this drill.

•  Carrier should make use of his free arm during this drill by aggressively “punching up” through the pads with an open hand.

•  Carrier must keep his shoulders square and keep his pad level lower than his opponent’s.

Our second drill to develop toughness is called the Sideline Drill (See Diagram 2). 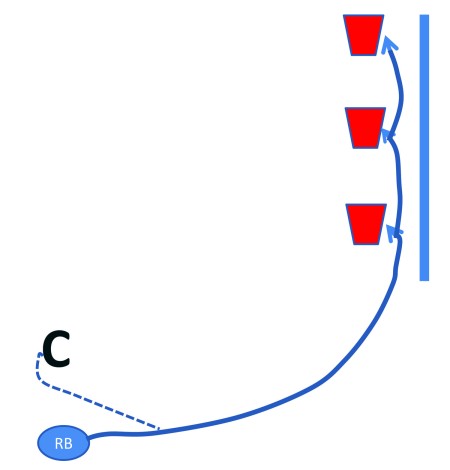 Purpose: To teach ball security and tough running by staying inbounds as the RB takes on the tackler.

Method: Align 2-3 bag holders five yards apart, three yards from the sideline. The coach and RB align on a selected line of scrimmage near the hash marks. On the cadence, the coach tosses a pitch to the RB who then works his way upfield along the sideline. RB must be the aggressor in this drill. He attempts not to get pushed out of bounds.

•  Ensure the RB has the ball secured properly in his outside arm.

•  RB should take on his pursuers by lowering his inside shoulder.

The third drill that we use at West Point to teach our backs how to run tough is our Double Spin Move Drill (see Diagram 3).

Purpose: To teach players how to spin off of a tackling defender and continue running north/south after evading the first tackler.

Method: Have two bag holders staggered going north/south about five yards apart. RB lines up about five yards from the first defender. Going at about 75% speed, the RB runs directly at the bag and just as he makes first contact, he spins off of the tackler and proceeds north to the second bag holder. RB repeats the same action on the second tackler. Have the RB make contact with the first bag using his right shoulder (spinning to his right) and with his left shoulder (spinning to his left) with the second bag.

•  Ball security must be intact.

About the Author: Paul Markowski recently completed his first season as Running Backs Coach for the West Point Sprint team. He previously coached at both Mansfield College and Simon Frazier University in Canada.