3 Drills to Improve Your Passing Game


The ‘Pat and Go’, ‘Noose’, and ‘Rapid Fire’ Drills will help improve your quarterback’s efficiency.

While I did not invent any of these drills, we have adapted them over time to best fit our needs. We rotate these three drills as part of our daily pre-practice, dynamic warm-up or individual periods. Each drill that follows is presented how we perform it along with some of our variations. I’ve also included a list of benefits I believe we get from these drills with considerations for those thinking about incorporating them into their practices. 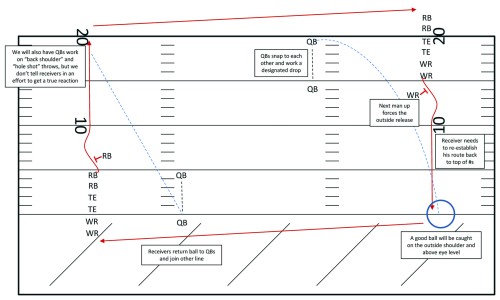 Start:  QB is on the hash ready to take a snap from another QB. Receiver positions himself on the top of the numbers. Next receiver in line steps in front and assumes an inside leverage press defender position.

Action:  QB starts each rep by taking a snap. Our QBs will say “GO” and take a shotgun snap for each rep. QB then secures the snap, takes a large step back, and keeps his feet alive while securing the ball with both hands in his loaded throwing position. Receiver works a release maneuver vs. the defender who forces an outside release off the top of the numbers.

Once clear of the press defender, the receiver re-establishes himself back on the top of the numbers and looks for the ball around 15 yards while maintaining his position. The QB drops the throw over the outside shoulder of the receiver with enough height that the initial contact with the ball is made above eye level.

Variations:  Deep Pat and Go:  Our normal Pat and Go times up with the 3-step pass game using a “Gun+1” QB drop. One variation is to have the receivers look later in their route and have the QBs take three steps back before firing their feet (mimicking 5-step timing).
Change the QBs Target Location:  We also vary the drill by asking the QBs to throw “back shoulders” or “hole shots.” We don’t tell the receivers every time because we want them to run and react to the throw. We have found that back shoulder throws are easier to practice when the receivers don’t know they are coming.

Add a Defender:  Incorporate DBs to press and run with the receiver without playing the ball.

Change the throw direction: We alternate throwing to the QBs right and left every time we do this drill. 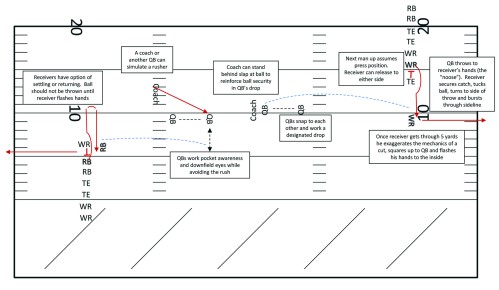 Start: The QB is on the hash facing the sideline ready to take a snap from another QB. Receiver positions himself on the top of the numbers five yards behind the QB and facing downfield. Next receiver in line steps in front and assumes a head up press defender position.
Action:  QB starts each rep by taking a snap. Our QBs will say “GO” and take a shotgun snap for each rep. QB secures the snap, takes a large step back and keeps his feet alive while securing the ball with both hands in his loaded throwing position. Receiver works a release maneuver in either direction vs. the press defender.

Once clear of the press defender, the WR re-establishes back on his stem and continues through five yards. After crossing the five-yard mark, the receiver uses great body mechanics to decelerate, plants his outside foot and snaps his hands, head and body around so he is stationary,

Once the hands flash, the QB aims to hit them (the “noose”) without the WR having to adjust to the throw. Receiver then looks the ball into his hands and then tucks. He turns in the direction of the throw and bursts through the sideline. The action should mimic a WR sitting down in a zone defense, receiving a throw away from the nearest defender, tucking the ball away and getting north and south knowing that his QB told him which way to turn with the location of the throw.

Variations:  Down and Back - Instead of squaring up in the first cut, the receiver exaggerates the body mechanics of a great cut, turns 180° and returns to the line he started on. He then breaks down and squares up to the QB by planting the other foot. The QBs aiming point is still the flash of the hands but now they are on the other side of the receiver’s body. Same finish as before – tuck the arm and direction of spin will be the opposite of before. The down and back version of the drills also allow the QB to work the pocket. As the receiver works down and back, the QB should be able to complete a full drop and mimic the action of sidestepping a rusher or protection issue without leaving the pocket.
Add a rusher:  A coach or player may line up and rush the QB, forcing him to evade the rush in a particular direction. We will have our rusher hesitate for a second after the snap and then rush up the middle to force the QB left or right. Or, we will have a rusher come clean off the edge and force the QB to step up in the pocket.

QB Ball Security:  Have a coach or another player stand at the QBs drop depth and slap at the ball, arm or shoulder as he works the pocket. 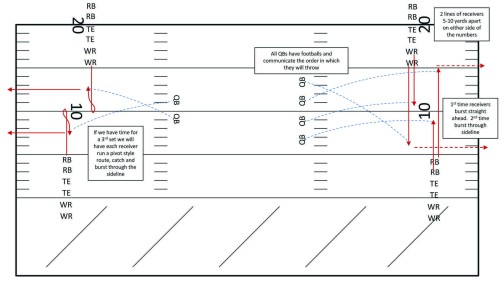 Start:  All QBs have a ball standing 5-10 yards away from two lines of receivers (equally split up) spaced 5-10 yards apart and perpendicular to QBs.

Action: Receiver from one of the lines runs toward the other line and looks for a throw from any of the QBs. As soon as possible after the first receiver moves, the first receiver in the other line runs in the opposite direction looking for a throw from another QB. Receivers look the ball into their hands, tuck it away and finish with a burst. The drill proceeds as fast as possible.

Variations: Different Finish - After every receiver gets a rep or two in each direction, we will adjust the burst. The receivers will now catch and burst at a 90° angle (similar to catching a crossing route, planting a foot and running north and south).

Different Route:  The next variation is to have them sprint halfway, stick a foot in the ground and pivot toward the QB as they change direction by 180° and head back to the line in which they started. After the catch, they burst out of a 90° cut like the previous adjustment in an effort to get north and south.

Count the Catches:  We have the most success with the execution of this drill if we give our players a goal such as “Let’s catch 50 in a row” or “The timer is set for two minutes – how many catches can we get before time is up?”

1. Brings all the skill players together early in practice.

2. One coach is easily able to praise and critique each skill player in a short amount of time.

3. A great way to warm-up up skill players and QBs. Receivers get a lot of technique work and catches. QBs get a ton of drops and throws in preparation for the rest of practice.

4. Consistently reinforces fundamentals. On a daily basis, QBs work first step in a drop, timing and location of throws, ball security, and footwork in the pocket. WRs get daily practice at proper hand technique when they catch, looking the ball in, tucking it away, bursting to finish each rep, release techniques, stacking DBs, and getting back on their route stem.

5. Carry over to game situations. The Pat and Go Drill demonstrates how the offense can always win on a fade/streak/go if the receiver keeps his spacing from the sideline and the QB places the ball properly. The Noose Drill is very appropriate for teams that give receivers a sit/run option on crossing routes. The Rapid Fire Drill requires great communication.

6. Minimal set up and equipment. These drills can be done anywhere with just a group of players and a few footballs. We use them during Friday walk-throughs in hotel parking lots and on unlined fields when we travel. We will do them in shorts and t-shirts, full pads and everything in-between. We install them every training camp and within a week the players can get them started on their own without wasting time waiting for a coach to set them up.

7. Great opportunity when you find yourself with a few extra minutes of practice or during special teams. Skill players and QBs not involved can work on their craft without over-stressing their bodies.

8. Can be used as conditioning by adjusting the tempo or duration of the drills.

9. Forces communication – both the verbal kind and the kind where a QB helps his receiver with ball location.

10. Easily adjusted to the emphasis of any offense. As an example, we use shotgun snaps, but under center and pistol are easily accommodated.

1. Need ample QBs. We usually can only get one line with our travel squad or during special teams because we have a limited roster size.

2. Ball return. We don’t have managers so our players have to return the balls to the QBs. A poorly returned ball or an error during the drill can shut everything down as we wait to get the football(s) back.

3. Coach can only watch one thing at a time. When working with QBs, you may miss a release of a receiver even though you were able to see the catch by shifting your attention away from the QB after the throw.

As practice time is reduced toward the end of the season, it is usually the individual periods that get cut. We prioritize these drills and make time to get them done, but we usually don’t get an ideal number of reps the last few weeks of the season due to time constraints. p

About the Author: Craig Knoche enters his sixth season this fall on the staff of the University of Chicago. He serves as assistant head coach, offensive coordinator and quarterbacks and tight ends coach. Knoche previously was a graduate assistant at Wisconsin and also served as a staff assistant at Stanford. He began his coaching career at North Park University and won three varsity letters playing at Illinois Wesleyan University.


Sign Up for the Play of the Week Newsletter