Defending the Trips Offense Part I


The trips offense is one of the most popular offenses of the last decade. Like the wishbone in the early 70’s, it has forced many defensive coordinators to work overtime to establish a game plan that will stop it.

We play a base 3-4 defense against the trips, and we feel very comfortable with what we are utilizing against this type of offense. Our main philosophy in defending the trips is to take away passing zones, either by initially positioning defenders in those zones, or showing the offense unoccupied zones before the ball is snapped. In other words what you see might not be what you get once the ball is snapped.

With the exception of the goal line defense, our three interior linemen (NT and DEs) are always in a two-point stance. They are much quicker off the ball since they can immediately see the ball being snapped. This also provides them with greater lateral movement along the LOS. The nose tackle and weakside defensive end can position themselves in either “A” or “B” gaps or directly over the guards. At the snap of the ball, their main responsibility is the A gap to the QB 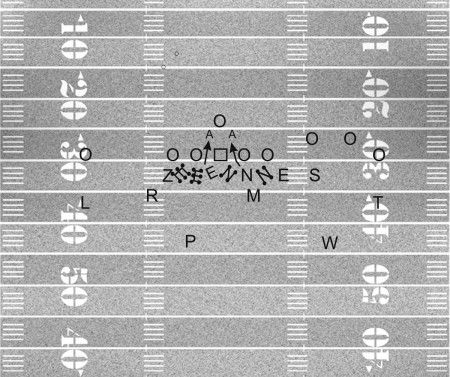 In situations that dictate a pure passing down, like second or third and long, we only rush one defender. The second defender rushes as deep as the center’s butt, looks to both sides for potential screens, and remains at home for the middle screen. This strategy has been very effective for us since we have picked off passes for two middle screens in two years 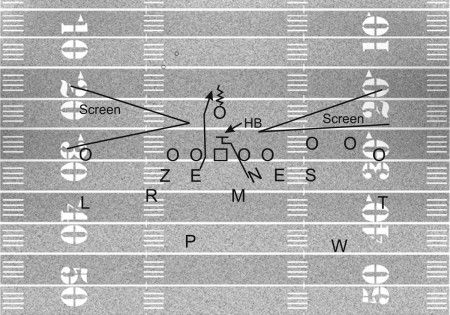 Our strongside defensive end always lines up on the trips side and positions himself on the outside shoulder of the last man (TE or T) on the line of scrimmage. He keys the near back (QB or HB) and makes his read according to the movement of the near back. If the near back moves toward the DE, the DE is to attack as a blocker, and he simply runs the back over, whether he is blocking, pass protecting, or leading a sweep 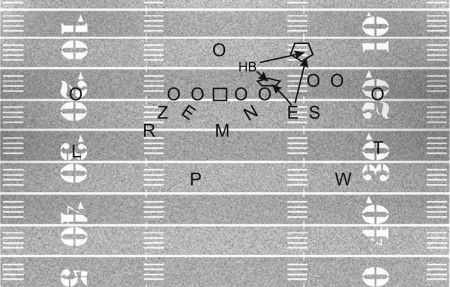 When the near back moves away, or is positioned away, the QB becomes the main target. The DE’s roll remains the same. This simple rule helps eliminate the QB throw-back pass or QB bootleg, since the near back is always covered 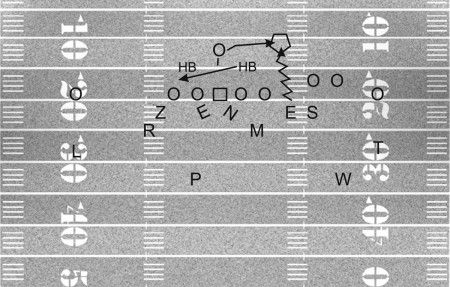 “Zeke” (Z), our weakside OLB’s responsibility will vary when the receiver to his side is tight or split. When looking at a tight end set, his first responsibility is to hit the TE, drive him back into the backfield and eliminate the TE from becoming involved in a pass pattern. He then works his way inside to the “C” gap 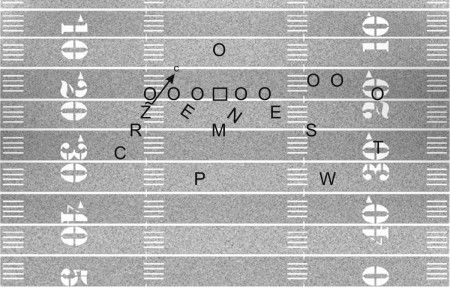 When the receiver to Zeke’s side is split, Zeke delivers a healthy forearm blast into the tackle, and then releases to his outside in a search-and-destroy mission to contain and pick up any opponent to his side in man-to-man coverage. Once again, this simple rule prevents the offense from executing backside plays like screens, reverses, and throw back passes

“Sam” (S), our SLB, is positioned directly in front of the closest WR off of the LOS. This position helps in preventing him from being the victim of a crack back block and also puts him in a better position to maintain outside containment against the sweep or pitch option. It also allows him to drop to his pass coverage zone more rapidly. His pass coverage responsibility is to drop at a 45-degree angle directly in front of the number-two WR. If possible, he will attempt to make contact with any WR in his zone, delaying the receiver’s involvement in the pass pattern 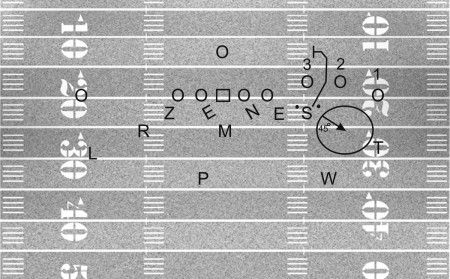 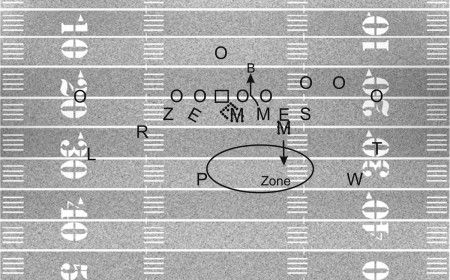 “Rambo” (R), our weakside inside linebacker has responsibilities that depend on whether or not he has a tight end or split receiver on his side. His normal position is five yards outside of Zeke, and five yards off of the LOS. His first responsibility against the run is the “B” gap and, by initially being in this alignment, it is hard to trap him, and, more often than not, he seldom gets blocked on running plays to his side. In addition, by being outside of Zeke, he is already in a position to take the slant pattern away

When Rambo only has a TE on his side, he stacks just outside of Zeke. His first read is the offside guard. If the guard stands up to pass block, Rambo drops at a 45-degree angle towards the trips and takes away the quick pass to the TE 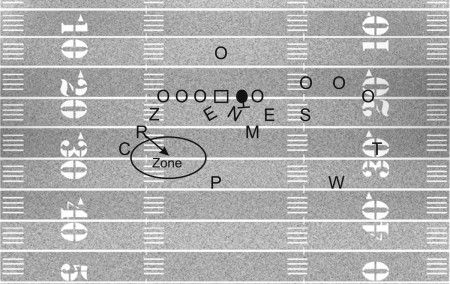 If the offside guard pulls toward Rambo, he immediately comes up and blocks the unsuspecting guard before he can execute the trap. We are looking for a collision, forcing the counter to be jammed up in the backfield 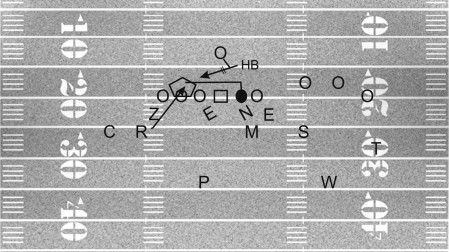 While in our base defense, we try to keep it very simple. We either use weakside support “Panther” (P) or strongside support “Wolf” (W).

Both safeties are positioned approximately 10-12 yards from the LOS. The weakside safety lines head up on the guard to his side. Our strong safety lines up between the number 2 and 3 receiver 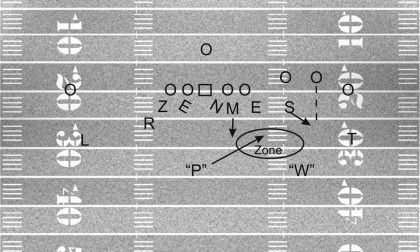 When the Panther call is made, the weak safety rotates in the direction of the trips into the unoccupied zones between Sam and Mike. His rotation moves directly into the area where quick slant and short posts are executed. This rotation has accounted for more than half of our total interceptions in the past thirteen years.

While Panther is rotating to the strongside, Wolf rotates away from the trips and into the deep one-third of the field, keying the backside receiver. Both safeties are taught to get to their zones as fast as possible and wait for the pass to be thrown. We do not want them running to their zone while the ball is in the air 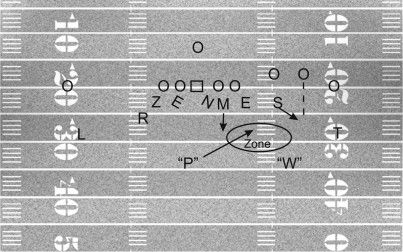 Our second rotation in the base defense is the Wolf call. The Wolf coverage is used primarily when our opponent is running predominately to the trips side and throwing quicker, shorter passes or when the QB is under extreme pressure from the pass rush. Wolf, the strong safety, can either move up near the line of scrimmage, acting as if he were in a Monster technique, or remain in his normal alignment. At the snap of the ball, he closes into the area unoccupied by Mike and Sam. While the strong safety is rotating forward, the weak safety rotates to the trips side and back at a 45-degree angle into the deep one-third. 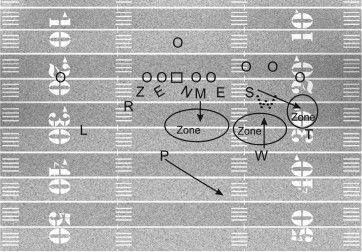 Our base defense against the trips covers the majority of situations you will face. There are several base rules that prevent gimmick plays from being successful. Very few areas of the defense are vulnerable and by using this very basic scheme, at the very least, you will be in pretty good shape defending the trips offense.

Although the base 3-4 will give you a very solid defensive approach, we do utilize several blitzes from our linebackers, safeties and corners. Different phases of this defense will be covered in the next issue of GS. When all phases of this defense are exposed, you will have tremendous flexibility DEFENDING THE TRIPS offense.

About the Author: Mike McDaniels has coached in northern Wisconsin and northern Illinois for 22 years. His overall record is 72-48. McDaniels has authored a number of coaching clinics and has written two books, “Winning Football With a Modern Passing Attack” and “The Pro 3-4: Winning Football With a Multi-Purpose Defense.” He is currently teaching at Auburn High School in Rockford, IL.