We base from a wing-t attack but have chosen to be in the shotgun about 40% of our snaps. Our base play from the shotgun wing-t is the jet sweep. We have found over time that the jet sweep is so dangerous and difficult for defenses to stop that they sell out when they see the motion and create massive running lanes for complementary plays. The horizontal motion and quick hitting speed of the jet sweep makes it a lethal play when executed properly. We run this play from trips, twins, two tight ends, unbalanced, and various other formations to keep the defense guessing and give ourselves a variety of angles on the defense.

We like to get the defense moving pre-snap as much as possible. We do this through the use of jet fakes. Our wingbacks are numbered in our system. The left wing is #2 and the right wing is #4. Therefore, if we want to fake a jet sweep, we just call the number of the wing and say the word æflashÆ. When we do this, the called back will come in motion in front of the QB, they will fake a jet exchange, and the QB will then run the called play. Our base complementary play involves a flash by the 2-back across to show jet and run power to the same side so that, as the defense widens, they open the off-tackle hole up for the power play (Diagram 1). 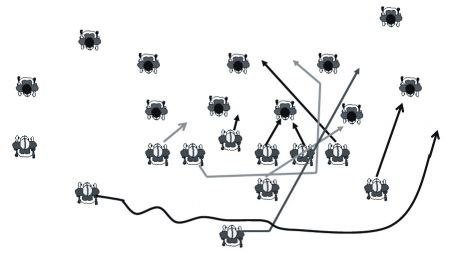 We will offset our fullback to the playside a great deal in this offense and utilize him as a lead blocker on the jet sweep play. Therefore, we run a jet tackle trap play to the QB, with the fullback blocking as a decoy to slow down aggressive defensive linemen that want to overplay the jet sweep (See Diagram 2). 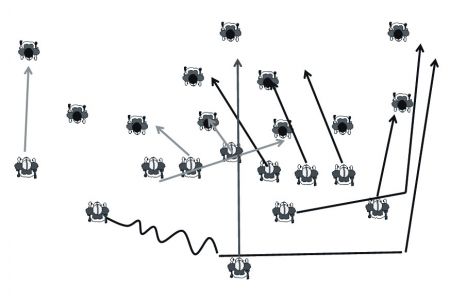 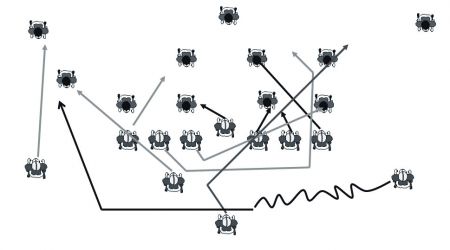 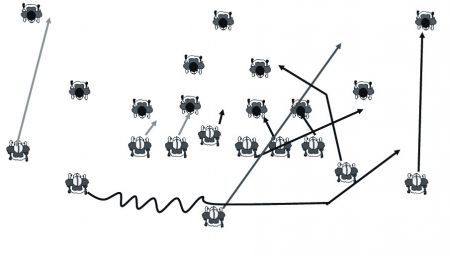 When we run belly to the spilt end side, we will base call when we get a shade technique (See Diagram 5) 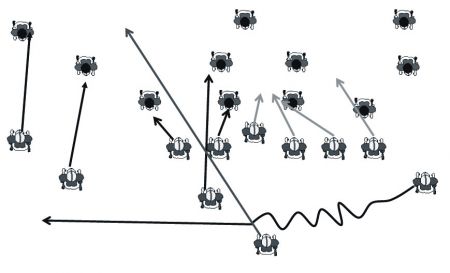 and utilize ōXö blocking when we see a 3-technique (See Diagram 6). 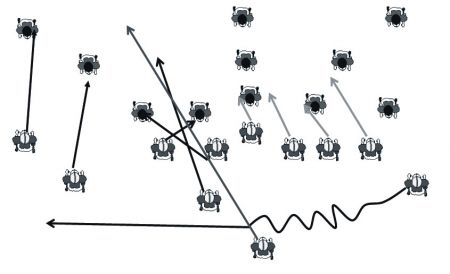 We also try to get the QB to the outside by using a spread formation to run the buck sweep. We will trade out our fullback for another wing and bring that man in motion left while we run buck sweep back into the motion to the right (See Diagram 7). 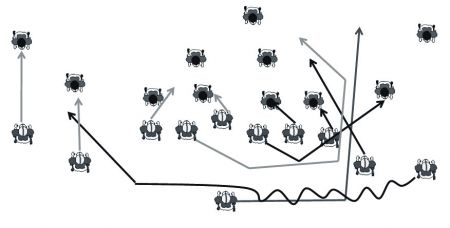 We began to notice that the flash fake by our wings was causing a distortion of the defense right before the snap of the ball. The defenders were either moving to where they thought the flash back would cut, or, they were keying the QB for where he might run the ball off the fake. This caused us to begin using the flash fake as part of our passing game. The first way we used it was just to bring an extra blocker to the point of attack on a full flow pass play (See Diagram 8). 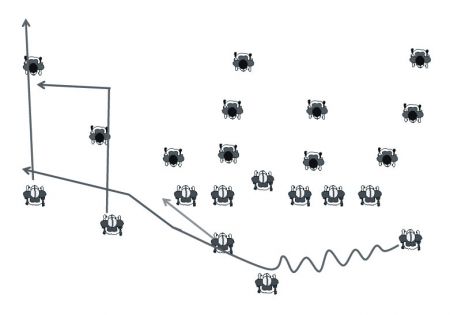 We then began to realize that the safeties would move with the flash back and give us an advantage if we passed away from flash. Therefore, we added the bootleg (See Diagram 9) 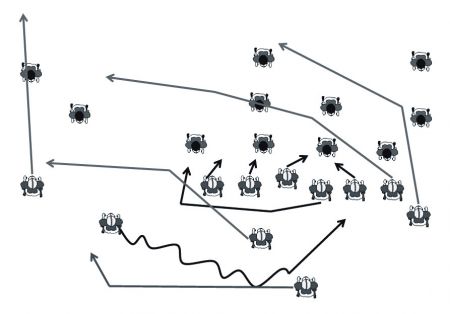 which became a great misdirection complementary pass play off of jet sweep action.

The jet sweep has been a great play for our offense. It allows us to attack the flank of the defense very quickly. We have noticed that defenses will adjust to our motion and key our motion back in order to stop the jet sweep. This has made the complementary plays that we run off of jet action all the more effective. The jet sweep and its complements have allowed us to attack defenses at multiple points and move the ball effectively.

About the author:  Rich Hargitt has served as a head coach on the junior varsity level and as both an offensive coordinator and head coach at high schools in Illinois, Indiana, and North Carolina. He is currently coaching in Mt. Holly, NC. Hargitt recently earned a Master of Arts Degree from Ball State University.