THERE ARE TWO primary keys for offensive football — getting the ball to your playmakers and controlling the tempo. Both are critical concepts for success in moving the ball and dictating the momentum of the game.

‹    Playmakers. In its simplest, philosophical terms, the goal here is try to get the ball — in open space — to people who can score. Whether you do it through the option game or by throwing the football, this is the main idea of offense — to get the ball to your playmakers. Our team achieves this by utilizing screens and crossing routes.

One of things you can do to emphasize this philosophy is to script your early plays, thus making a conscious decision to get the ball into a certain player’s hands. Always make sure your best players are involved in the game — they are the ones who will make things happen on offense.

‹    Tempo. With all the tough, pressure defenses, blitzes and soft zones that are out there today, it’s more important than ever to control the tempo of the game. There are two ways to immediately control tempo: the snap count and the time spent in the huddle (whether it’s using the entire play clock, a quick huddle or no-huddle packages).

It’s especially important to control the tempo of the game against a blitzing team. You must keep that kind of defense on its heels. If not, you’re going to have a long day trying to throw the ball.

We like to say that our offense is a well-coached backyard team. Our main goal is to put players in position to make plays while teaching them offensive fundamentals. It’s important to keep things simple and get the offensive players a taste of success early and often.

In designing our offense, we try to gear what we do around the quarterback’s strengths and that is how we decide what we’re going to do from year to year. You can design an intricate playbook, but your offense can only accomplish what your QB can comprehend. Each year, prior to the season, we modify and tweak our package to the strengths of our QB.

This offense is designed to look complicated to an opposing defense, but in reality it is fairly simple. We build off base plays and add tags for diversity. To keep things simple, our offense consists of the following:

We always have the tight end to the right and the split end to the left. We keep them in the same spots and move other players around to give us various formations. This system makes your play calling easier, it gives you more reps in practice and your receivers will get better at running their assigned routes.

Boiled down, the goal of every offense should be to score one more point than the opponent.

Mesh Play
Some of our best crossing routes and shallow patterns are discussed below. The staple of our package is the Mesh Play. It’s a very simple play and we start every practice off by working on it. 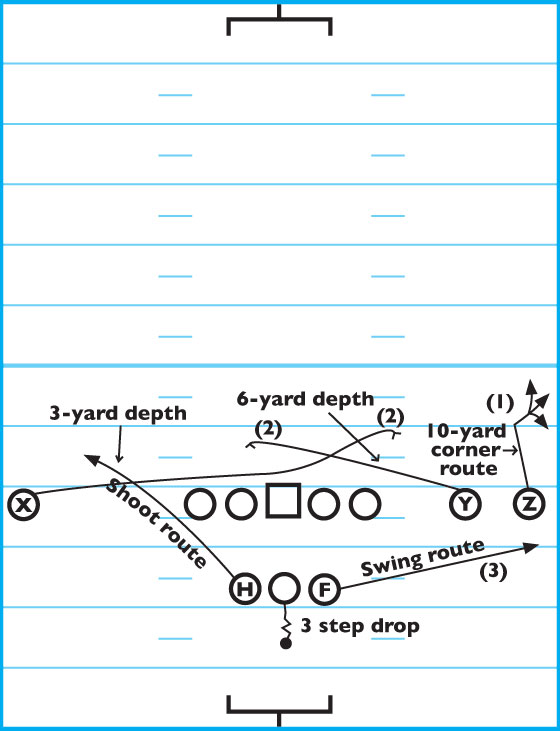 Once they cross, they find the first available window in the zone coverage, sit down and square their shoulder’s off to the QB. The point they settle on is up to each receiver. We’ve had them as close as side by side or as wide apart as the hash marks. It’s mostly a matter of reading the zone.

The FB runs a swing route to the right. It’s important to note that this isn’t a bubble route. You don’t want him getting depth on this route, instead, you want the FB to hit the flat like he’s stealing second base in baseball. Tell him to get wide, outside the numbers. He must get there as quickly as possible and continually turn his head back over his inside shoulder, looking toward the QB. He doesn’t square his shoulders to the QB, instead, he chops his feet and waits for the ball. If the ball is thrown to him, you want him to quickly catch it and go downfield.

The HB runs a shoot route to a depth of 3 yards, getting wide to the field numbers. The object of the routes for both the FB and HB is to draw the LBs wide and open up the windows for the two crossing receivers (X and Y).

The QB takes a 3-step drop out of the shotgun and makes a three-part progression read of:

We also run the mesh play against man coverage. The only difference when you’re facing man coverage is to ensure that your mesh receivers remember one basic route-running principle: settle vs. zone and run vs. man.

DIAGRAM 2: Mesh Play (Vs. Man Coverage). Everything stays the same in this play, except that after getting to a depth of 6 yards, X and Y take it upfield with a slight bend. The most difficult part of this play is for the receivers to determine whether they’re facing zone or man coverage. As a clue, we tell Y to watch X as he’s running his route. If X has a defender chasing him, then Y can assume that he also has a defender pursuing him and both can turn their respective routes upfield after the mesh. 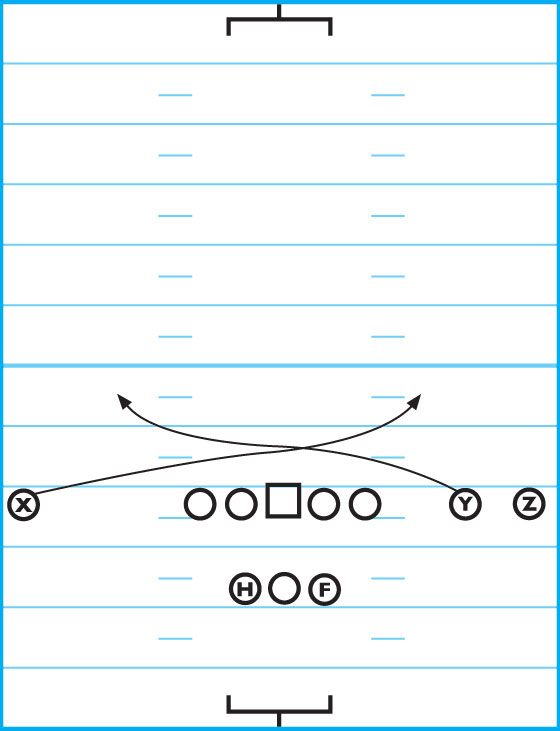 The QBs reads stay the same (Z, mesh receivers and FB). The only difference comes on the possible throw to Z. On a throw to Z, the QB should lead the receiver downfield, beating the man coverage.

The shallow package works as a complement to the mesh play. This package is also simple, but it grows increasingly tough for defenses as you become creative and tag things.

In this package, you can tag any receiver to run the shallow route.

DIAGRAM 3: Shallow Package (Y Shallow). In this example, Y is tagged as the shallow receiver and he runs a shallow crossing route. The depth is run at the heels of the defensive line, underneath the LBs. It’s critical that Y continues to run his route across the field. This isn’t a mesh route where he finds the opening in the zone, sits and squares shoulders to the QB. On this route, he keeps running for the duration of the play. 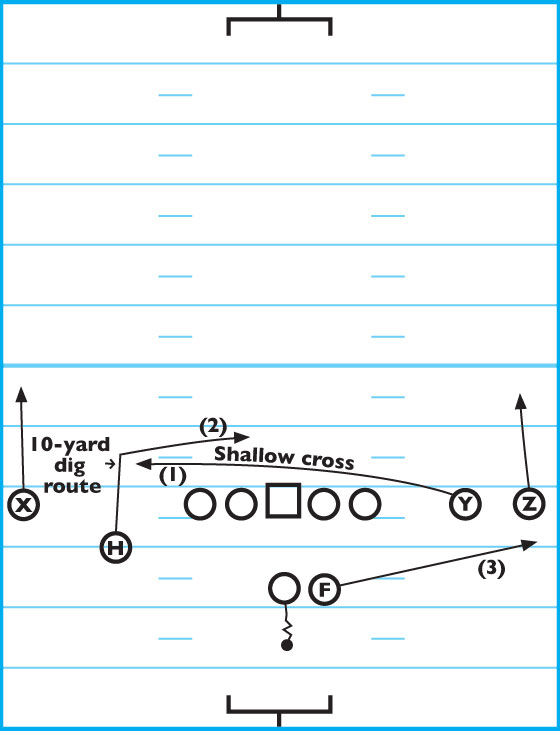 The HB, who’s aligned in the slot on the left, runs a 10-yard dig route. Again, the receiver doesn’t settle into an open window; we’ve had much more success if he runs the 10-yard dig, then breaks hard across the middle, looking for the pass. Coaching Point: Have the HB attack the flat defender’s outside shoulder, get to the 10-yard dig and then cut across.
X and Z run vertically downfield, while the FB runs a shoot route to the right, replacing Z on that side and settling in about 3 yards outside the numbers.
The QB’s progression on this play is as follows:
1.    Shallow cross to Y.
2.    HB running the dig route and cross.
3.    FB to the right.

DIAGRAM 4: Shallow Package (Z Shallow). This version is the same as the previous Shallow package, only this time Z is tagged to run the shallow crossing route. When this happens, Y breaks out, replaces Z and runs the vertical route. 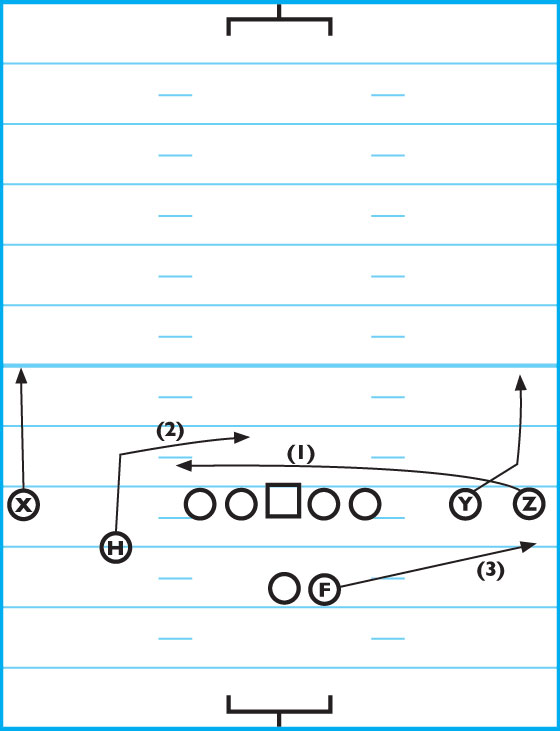 The HB runs the same 10-yard dig route and the QB makes the same progression read as before.
Shallow Package With Curl

One of the best passing plays in all of football is the curl route. We’ve incorporated this route into our Shallow package and have had tremendous success with it.

DIAGRAM 5: Shallow Package (With Curl). This play starts off as if it’s our regular shallow play with Y running the shallow crossing route, HB running the 10-yard dig route, X running vertically and FB breaking out to the right. The big difference is the Z receiver. Z begins to run his standard vertical route, only this time, he changes to a curl route at 15 yards. 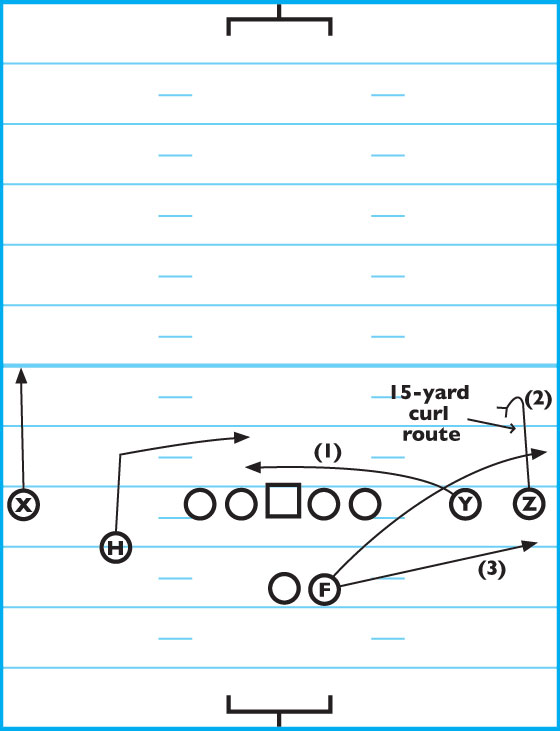 This change in progression can be a little tough for the QB to master since he’s used to reading the dig-route second while in the Shallow package. You will have to work with him to get him used to it.

Editor’s Note: Chris Hatcher, holds a .870 winning percentage at Valdosta State University, with a 68-10 overall record. In 2006, his squad finished with an 8-2 record.