Having been a defensive coordinator at Massachusetts Maritime Academy for six seasons and a high school coach for 30 years, I recognized the wisdom of Vince Lombardi’s old expression, “Football is blocking and tackling – the rest is mythology.”

The more the game changes, becoming more and more like basketball on grass in many cases, the more it becomes evident that the basic fundamentals are still the most important aspect to successful football programs. A number of years ago I was asked to make a clinic presentation on tackling, and as I searched through my defensive cut-ups for good examples of the tackling fundamentals I was teaching in practice to use in my presentation, it became very evident that very rarely does the “perfect form tackle” occur in the chaos of battle. What I did discover, however, was that as a defensive team we ran to the ball exceptionally well.

As a result of great pursuit, we were a very good tackling team because we had so many players swarming to the football. We may not have been using the exact form tackling techniques we practiced all the time, but we were getting ball carriers to the ground effectively, and the second and third players in were trying to strip the ball.

What I’m saying is add “Pursuit” to Lombardi’s list. In essence, pursuit is a fundamental element of tackling that can’t ever be overlooked and needs to be practiced. The best pursuit drill I ever found comes from Coach Kraig Paulson, presently Assistant Head Coach at UNLV and formerly of Montana. I attribute a lot of our good pursuit habits to the drills Coach Paulson so generously shared with me at a clinic presentation.

A coach was assigned to watch his players during the drills to see if they were using proper technique, aligning properly, communicating properly, giving all-out effort, and doing everything with superb enthusiasm. After each phase of the drill was complete, if any coach felt there was a lack of technique, enthusiasm, or effort from his players, he would explain what went wrong and the defensive coordinator would not give the defense credit for that rep. Once the desired number of perfect reps was attained, the drill was over.

One of the aspects I like about running the drills as perfect plays is that when mistakes are pointed out, the natural inclination is for team members to “point the finger” at the players who “messed up” or to say negative things which destroy team unity. Here is a perfect opportunity to teach your team that when things go bad in a game or at practice, negativity can be destructive. Encourage your team at times when things aren’t going your way to bind together and “pick each other up” instead of tearing teammates down. Reward them for encouraging their teammates in a positive way.

RUN PURSUIT:  We start the drill with all of our defensive units loosely grouped in the end-zone. A coach calls out “1st D” or “2nd D”, and that unit sprints to the 5-yard line and gets the defensive call. If you have enough players, you can line up the formation for the defense to get lined up on, or if bodies are in short supply, you simply place cones where receivers and backs would be aligned, or in our case, I would simply bark out the formation verbally. They would then line up on an imaginary 2  X  2 or 3  X  1 or tight end left, slot right.

As they came on the field, we wanted our defensive team to show enthusiasm by jumping up and down. I would blow a whistle if there was appropriate enthusiasm, and the defense would get in a huddle and make their calls. They would then break the huddle and get lined up as quickly as possible, making any communication necessary for that particular call. We had barrels or a spacer for the D-Line to get lined up on. I would then call cadence and simulate a toss to the right side of the formation or the left side.

Each defensive player had a predetermined landmark on the sideline for a wide run to their side and away from their side marked by a cone. The D-Line, on movement of the ball, would do a quick up-down and then get quickly into their pursuit path, sprinting to the appropriate cone. All LBs and DBs would take the appropriate angles and sprint to their designated cones based on coverage and alignment. Once the defenders got to their cones, they chop their feet on the sideline.  When everyone is in place and chopping their feet, a coach blows a whistle and the entire defense sprints back to the huddle to get the next call.

I would then check with each coach by blowing a whistle and pointing at them, usually in the same order each time. If there were no errors from their unit, they would give two thumbs up. If there was an error, that coach would hold two thumbs down and explain quickly what was wrong. As an example,

“The left DE loafed on his way to the sideline.”

The entire process is repeated until the desired number of perfect run pursuits is executed (Diagram 1). 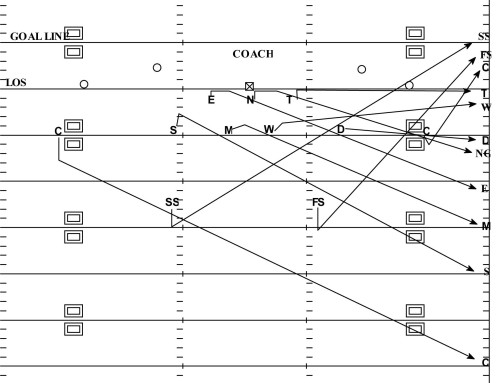 PASS PURSUIT: This drill is started exactly the same as run pursuit with the teams coming out of the end zone with enthusiasm. Three receivers or coaches are placed at different locations in the secondary at the coach’s discretion. I then simulate the snap, drop back, and throw the ball to one of the three receivers. The D-Line once again does an up-down and then simulates the rush on the QB. The defense yells “Pass” and reacts to the thrown ball after taking their drops, etc.

The entire defense should yell “Ball” when the pass is released and sprint to the receiver who, hopefully, catches the ball. If he catches or misses it, the defense sprints to the receiver to whom the ball was thrown and forms a circle around him chopping their feet. When all defenders are chopping their feet around the receiver, the coach blows the whistle and all defenders sprint back to the huddle. Once again, the evaluation process is repeated and credit is awarded or denied based on their execution and enthusiasm (Diagram 2). 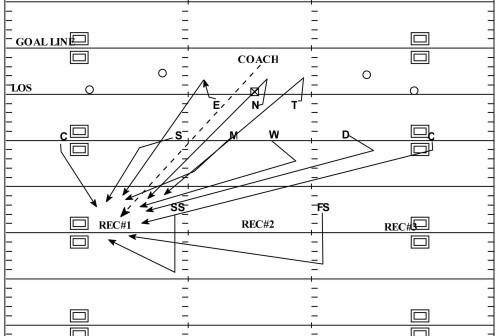 TURNOVER PURSUIT: This drill starts exactly the same as the other two drills. At the snap, I can simulate a pass, draw, or screen and either throw the ball to one of the DBs or fumble it on the ground. If it is intercepted by a DB, he yells “Money” and runs outside the numbers to the nearest sideline. The nearest DBs to the interception simulate a block on an imaginary intended receiver, and then sprint to throw a block outside the numbers to the side of the interception return.

The D-Line does an up-down at the snap, reacts to run or pass, and if intercepted, they must go and touch the QB to show they know in a game it is their responsibility to block him from making the tackle on the interception. They then sprint into the end zone with the rest of the defense and celebrate the TD. If the ball is fumbled, the closest defender tries to scoop and score with the entire defense sprinting into the end zone to celebrate.

If the ball can’t be fielded cleanly by a defender, the closest defender falls on the ball and uses proper technique. Everyone else in the defense must run to that player and point enthusiastically that the defense has just made the recovery and it is first down for our offense. Once again, the evaluation process is observed and a rep is credited or denied (Diagram 3). 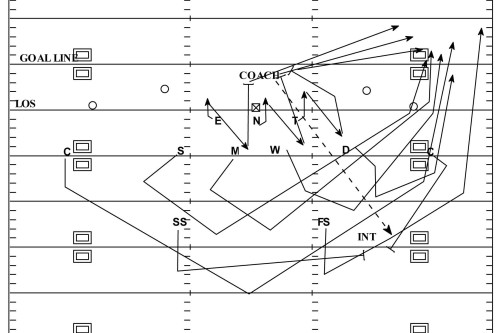 I have found this series of drills to be very effective in accomplishing many positive qualities and habits in our defense. It generated a lot of enthusiasm and camaraderie in our players, could be accomplished in 10 minutes or less, provided great conditioning, provided great peer pressure to execute properly, and provided opportunities for players to assert good leadership qualities. It also encouraged their teammates to do things correctly and to support players when they “messed up”. Players had so much fun they forgot how hard they were working.

About the Author: Michael Rainnie is in his 12rh season on the staff of Massachusetts Maritime Academy. He serves as both assistant head coach and O-line coach. Rainnie previously coached at Falmouth High School (MA) for 18 years, the last three as head coach. A graduate of Colgate University, he also coached at Hamilton College.