The no-huddle offense requires teams to devote extensive amounts of practice not only on the run and pass concepts that they wish to implement but also on the actual structure of the play calling system. It is imperative that one word be utilized to communicate an entire set of skills that need to be conveyed to the offense. For our offense, the word “Georgia” and its accompanying hand signal convey that the “Drive Concept” has been called. This play is a combination of the Shallow Cross, the Air Raid Mesh, and a simple Three Tier Flood System.

The #1 receiver play side, if the offense is in 2 x 2, will run the Shallow Cross or Under Route and attempt to get into the backside flat before making a decision to run versus man coverage or sit down versus zone coverage. The #2 receiver will release outside to create a natural “rub” on any defender chasing the Z receiver and then build to 12 yards and break inside. The backside #1 receiver will run the Go Route and the #2 receiver will execute a Hash Read on the safety. If the middle of the field is open, he will execute a post and if it is closed he will stay on his Seam Route. The tailback executes a Flat Stop Route in the flat to hold coverage there and provide an outlet (Diagram 1). 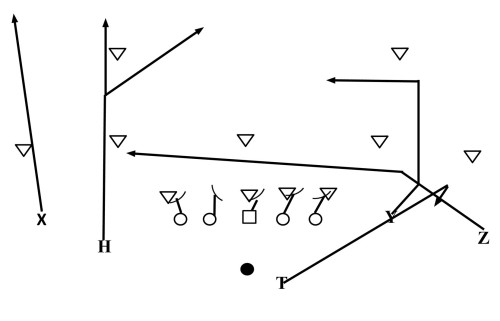 The quarterback’s read is very simple in the Georgia Concept. He reads the “Peek” or deepest route in the concept pre-snap. In this case, he would be looking at the X or H on their vertical routes. If that is cloudy, he immediately goes to his first or short read which is the Shallow Cross or Flat Stop Routes. If these are covered, then the Dig Route by the Y receiver should be wide open as his second read.

The goal of the play is to create a vertical stretch with the backside receivers and then build a triangle between the tailback, Y receiver, and Z receiver that allows the quarterback to key the Sam linebacker’s movement. We do not teach the quarterback to read defenders but instead to read his own receivers. However, the quarterback does key the movement of the Sam and Mike linebackers to give him an idea where the opening might appear. The same concept is seen from a 3 x 1 set with the tailback now meshing with the Y receiver to get back into the strong side flat position (Diagram 2). 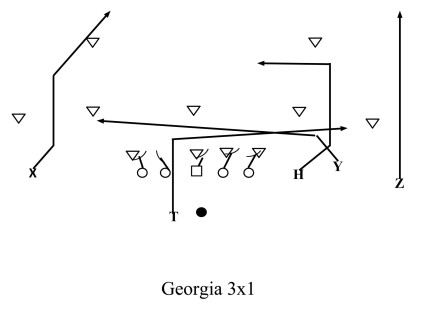 In Diagram 3, the concept is run from a 3 x 2 set to create more pre-snap width for the horizontal stretch. Diagram 4 shows the concept being run from a “Nasty Set Formation.” This formation can be set into the boundary to create a fast crossing action and allow the Y and H receivers to run back into the field for more space. In addition, this is a difficult set for defenses to line up to correctly. 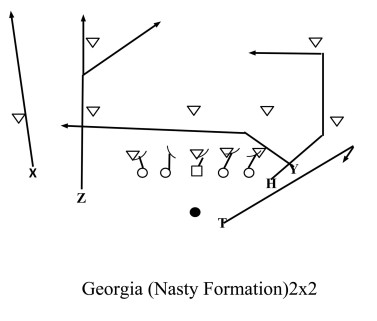 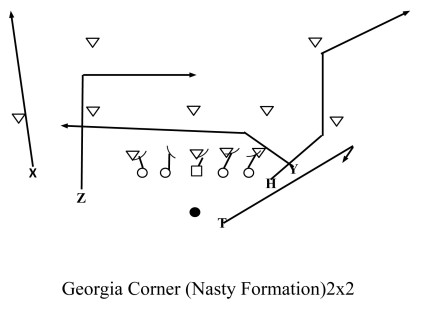 The H receiver can be tagged on a Corner Route such as seen in Diagram 5. This tag automatically requires the first receiver on the other side of the ball, in this case the Z receiver, to run the Dig Route. The same concept is created with an entirely different look so that defenses are not able to key on certain sets and releases by the receivers.

Diagram 6 shows how the Georgia Concept might actually take the place of the Mesh Concept in this offense. We wanted to run both a Drive and a Mesh Concept but did not want to have too many plays. So, we created Georgia but built a tag into the play to be used when we wanted to run the Mesh Concept. Diagram 6 shows that when the word “Mesh” is tagged to the play, the first receiver on the other side of the ball from the Drive Concept will mesh back with the Under Route receiver. This is now a great man coverage beater that can be built into the Georgia Concept which is a natural zone beater concept.  Georgia is now a “two in one” concept that can equally attack man and zone coverages. 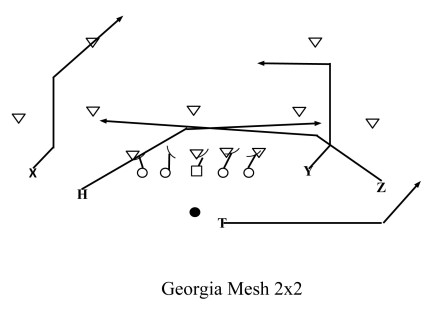 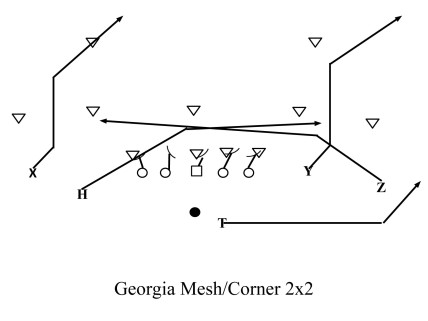 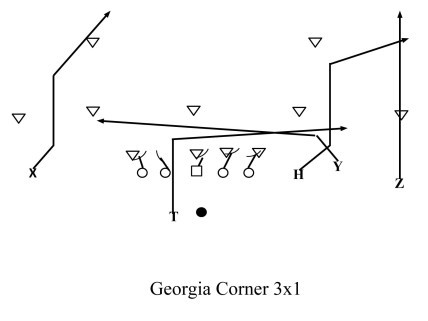 The Georgia Concept evolved out of our desire to have a Drive Concept, a Mesh Concept, and a High/Low Flood Concept all inside one no-huddle word. Georgia is a simple concept with consistent reads that can be run from a variety of formations and is easy to install.