Creating a Swarming and Physical Defense Through Daily Pursuit Drills

Relentless pursuit by a defense has many positive effects – caused takeaways, minimizing opponents’ big plays, big hits, and momentum shifts. Pursuing the football is the most basic defensive fundamental that all players can excel at regardless of talent. You might not always have an abundance of talent, but you can coach and demand superior effort. Pursuit is all about effort and willpower and has nothing to do with your height, weight, speed, or strength. By doing these pursuit drills, you will find out the ones who have a burning desire to play the game and you will get your defense to play with reckless abandon that will create a mental edge over their opponents.

The pursuit drills we do set the tempo for practice and gets our players’ in the right state of mind. Each pursuit drill emphasizes the importance of never giving up on a play and straining to get the football. In essence, we want to totally eliminate loafs. We tell our players that nothing bad is going to happen by running to the football, so never give up on a play. Loafing is unacceptable on our defense, and we tell our players that when they loaf they might as well go play for the other team because they are traitors. If our players don’t go full speed, then they will not be part of our game plan.

There are three elements of effort that we are looking for when doing these pursuit drills and when watching film:

Burst - noticeable change of momentum at the moment of recognition.
Speed - maximum rate of movement.
Finish - proper manner of completion.

The first pursuit drill that we teach is Sideline Pursuit. This drill emphasizes pursuit angles and spacing. Starting off in fall camp and early in spring, we put cones three yards apart down each sideline. We designate the first three cones to be used solely for our three defensive linemen (we run a 3-4 scheme, but you can adjust based off of your defense). When the coach calls out the defensive unit, they huddle and are given a defensive call. After they line up, a coach gives a cadence, and when he snaps the ball, he drops back like a QB. The players will drop according to the coverage call and the DL will rush five yards past the line of scrimmage. The coach will give a direction to either sideline which tells the players which side to pursue. Other than the first three cones that are designated for the DL, all the other cones are first come, first serve.

We wanted to develop a competitive mindset and see which players want to get the football and beat other players to the cones. The coach in the back has a whistle and will blow it multiple times throughout the players’ pursuit to the cones. When the whistle is blown, the players are required to touch their chest to the ground and get back up and continue to pursue. They have the option to dive out on their chest, or do an up-down.  Once the player reaches the cone, they break down and have hot feet in a good tackling position with their hips and butt sunk and eyes up and facing the sideline. They continue to have hot feet and are still required to do an up-down if the whistle is blown. Once all players reach the sideline, the coach will blow the whistle for a few more up-downs and then they are whistled back to the huddle.

Depending on the time of year and progression of your players, this can be repeated or you can call the next unit out to the field. However, if one player loafs, that player is called out and the whole unit is required to do it again. Once the players have a great concept of the drill, we take the cones away to allow the players to create their own sense of spacing when in pursuit (Diagram 1). 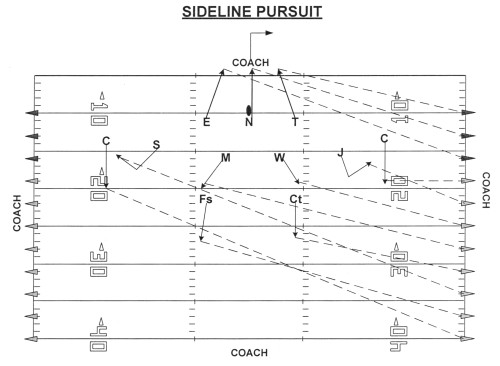 The next pursuit drill we teach is Run to Coach Pursuit, which emphasizes getting eleven helmets to the football. The same procedure is used to start off the drill; however, this time the coach will point to which coach he wants the players to go to. Once the players get to the coach, they circle around in the same good tackling position with hot feet and the coach will take them through a series of up-downs prior to dismissing them (Diagram 2). 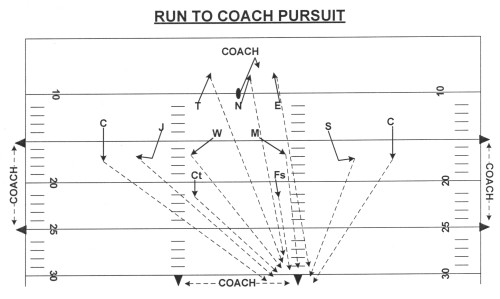 The final pursuit drill we run is the Takeaway Pursuit Drill. This pursuit emphasizes the proper process and pursuit once the defense produces a takeaway – we become the offense. We will use this pursuit on lighter preparation days to save our players’ legs. After the same starting procedure, the coach will drop back and throw the ball to any of the defenders in coverage. We coach our players to catch the ball at the highest point and then get to the near bottom of the numbers (not the sideline). By getting to the bottom of the numbers, it will allow our defender with the ball to escape tacklers and not just get run out of bounds. The DL turns and finds the QB to block. The nearest defender to the ball is coached to turn and block the intended WR then follow behind the ball in case of a fumble.  All other defenders get to the top of the numbers and clear a path for the ball carrier and lead him into the end zone (Diagram 3). 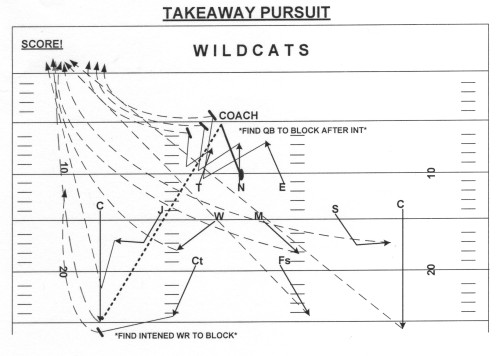 About the Author: Brian Wallace is in his third season as co-defensive coordinator, linebackers coach, and recruiting coordinator at Louisiana College. Wallace played linebacker at LC from 2004-2008 and was a two-time team captain. He started his coaching career at his alma mater but then spent three seasons as a defensive and special teams assistant at Louisiana-Lafayette. Wallace then joined the LC staff in February, 2011.